learn about coal scrip via these frequently asked questions

What is coal mine scrip?  In the old days coal miners were most often paid with scrip and not U.S. currency. They were paid monthly based on the weight of coal the miner blasted, dug and loaded onto carts during the month.  They were not paid by the hour.  They could work any days and as long as they wanted to.

During the month if the miner needed additional money, they could request an advance of scrip for the amount of coal they had loaded earlier in the month, for which they had not been paid.  This led to the tendency of miners constantly being in debt to the mine company.  New miners were often not paid until two or three months after they started work.

In the early days, scrip was known by many other names including – Trade Tokens, Flickers, Secos, Clackers, Checks, P’Lollys, Good Fors, Lightweights, Bingles, Stickrs, Chink-tins and Dugaloos. Almost all company stores used scrip as change to insure the customer would come back to spend it.

What does scrip look like?  The original scrip was in the form of paper.  This was replaced by thin metal coins similar in size to its counterpart in U.S. currency.  The metal was brass, bronze, copper, aluminum, zinc, nickel, nickel plate and bi-metal. There were a few tokens made of a hard fiber, and even hard rubber or wood.  Scrip was usually denominated in the same values as U.S. currency.  The largest tokens were most frequently $1.00 face value. Although pieces with a higher face value such as $5.00 are common.  Most tokens were round, but others were oval, octagonal, hexagonal, scalloped edge, square, etc. 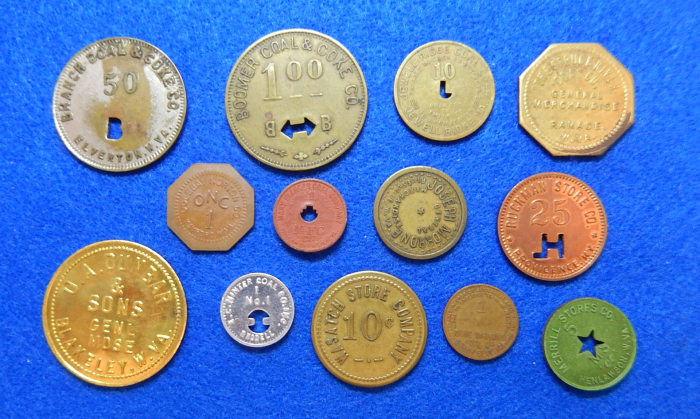 Where was it made and distributed from?  There were a number of scrip manufacturers.  However, the Osborne Register Company (ORCO) in Cincinnati, Ohio became the principal manufacturer and distributor (and later renamed Osborne Coinage Company). Ingle-Schierloh of  Dayton, Ohio was one of the major early makers before ORCO became dominant.

Was scrip used in other industries?  Scrip was also often used in the timber industry, iron mines, cotton mills, etc.  Many mine owners also owned the timber on their mine properties which was cut.

When and why did it get started?   The use of metal scrip token began in the early 1900’s.  There were a variety of reasons.

In what areas of the U.S. was it used?  It was used anywhere there were underground coal mines.  However, it is estimated that 75 percent of all scrip used was by coal companies in West Virginia, Virginia and Eastern Kentucky.

When and why was it phased out?  The use of coal scrip ended in the mid-1950’s, with a few coal companies still using it in the 1960’s.  There were a variety of reasons.

What is it worth today?  Like any numismatic, the value of a coin is based on the number produced, its condition and historical value, and its availability.  The Edkins Catalogue of United States Coal Company Scrip includes an Edkins rarity rating to help.  There are two volumes available from the National Scrip Collectors Association, Volume I contains all states except West Virginia, and Volume II contains only West Virginia.  No dollar values are listed in the latest editions, but a rarity rating from R1 to R10 is assigned to the tokens, with R1 being the most common and R10 being the rarest.  The catalogues also list details such as size diameters, shapes, etc.

Where can you buy Scrip?  Example sources include – eBay, Etsy, online stores like the JBvalu eShop, and the NSCA (National Scrip Collectors Association, www.nationalscripcollectorsassociation.org) newsletter and semi-annual meetings, one of which is in West Virginia.  Coal scrip tokens are extremely collectible as it is estimated that as many as 10,000 varieties exist, many still available at an affordable price.

About the author: This article was written by Bob Hampton (rhampton(at)aol.com). Bob is a long-time collector of coal mine memorabilia - including coal mine scrip tokens.  He and his family own a farm in Sandstone, West Virginia, in the heart of coal mining country.  He has met and gotten to know many previous and current coal miners and has a great appreciation and respect for them and their families.  The work they are and have performed is physically hard, dirty and dangerous.  Everyone should visit and tour an exhibition coal mine to gain an understanding and appreciation of what coal miners do. Bob has written a larger article on Coal Mining & Coal Company Scrip, available by download of a PDF (21 meg) on the link below: